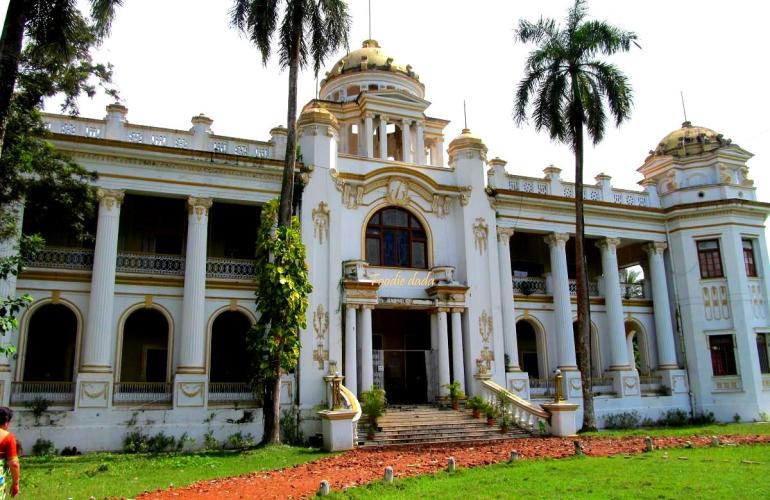 I rarely do write about my travel tales but yes, I do love writing about anything that’s close to my heart. And I really wanted to pen down this lovely experience of mine because I felt people in my city are quite unaware of this beautiful weekend getaway that has loads of enthralling history and architecture in store. Also people aren’t aware of that ancient Durga Puja at the dilapidated Mahishadal Rajbari which in itself is extremely fascinating and intriguing. Every history buff should visit this place at least once especially during the Durga Puja! So let’s get into the details a bit.

Frankly speaking, Mahishadal is a least known tourist spot in West Bengal and most of the people won’t prefer wasting their valuable time digging the history at this place (rather at the ‘palace’) having a glorious past. This historically significant place is located in the Haldia subdivision of East Medinipur district (West Bengal). It won’t take you more than four hours to reach this place by car from Kolkata, a perfect weekend road trip that would be destined to some awe inspiring historical discoveries for yourself.

The town is just 30 minutes drive from Haldia, so maybe you can stay at Haldia while returning back. There are several hotels in Haldia with all the amenities. We had halted at Hotel Millennium Inn near Durgachak (Haldia) which was pretty nice for a single night stay. For more information about hotels etc, you can contact the tourism office of the Haldia Development Authority.

Coming back to Mahishadal, it tells us the story of a North Indian businessman who came to the remotest corner of Midnapore and did set up a huge zamindari hundreds of years back. Back in the 16th century, the businessman named Janardhan Upadhyay Garg who was extremely rich bought a huge estate here at Mahishadal and built couple of Rajbaris (palaces) for his zamindari. While doing my little research at Mahishadal’s Phulbagh Palace, I found a document that had the elaborate history of this Mahishadal Raj written in Bengali, it tells how this estate was set up and the role of Mughal Emperor Akbar in that. Let me brief that a bit for you.

Janardhan Upadhyay was a high-ranked official in Emperor Akbar’s army. He hails from present day Uttar Pradesh. In 1667, he took the water route and landed in Geonkhali located in the Mahishadal block to spread his business over there. Within a very short span of time, he bought the zamindari at Mahishadal from Raja Kalyan Ray Chowdhury. Actually Ray Chowdhury’s zamindari was auctioned since he was defaulting in Emperor’s revenue payments. Young Janardhan Upadhyay was given the title of Raja by Emperor Akbar and was also presented with a Bairam Khan’s sword (Khan was Humayun’s trusted friend and Akbar’s guardian). So, according to the well-known history, Raja Janardhan Upadhyay was the one who established the estate of Mahishadal Raj and the Raj parivaar. Next, the Upadhyays reined there at Mahishadal in all their glory for four generations. Raja Janardhan’s fifth generation Raja Anandalal didn’t have a male heir and when he died in 1804, Rani Janaki Devi started ruling and it is known that she had ruled pretty efficiently. Rani passed the entire property to her daughter’s son, Raja Guruprasad Garg. Raja Guruprasad’s second generation Raja Ramnath Garg didn’t have any child and so Laxman Garg, who was Ramnath’s adopted son was titled the next Raja. Since then, Raja Laxman’s heirs were the zaminders of the area until India’s independence and the abolition of Zamindari system from the country.

In fact this zamindari reached the peak of its glory in the 18th century, in the days of Rani Janaki Devi. In fact it is said that the Phulbagh Palace was built during her time adjacent to the old Rajbari and that was somewhat a piece of architectural marvel in this part of the country, it was built for the purpose of a guest house. Rani was an insistent anti-British crusader and that slowly and steadily led to the fall of the zamindari and its glory. Today the old Rajbari is in a ruin which was built in 1857; it is so dilapidated that no one is allowed to get inside it. Truly speaking, it looks like a haunted house straight outta some horror movie! This is a two storied building with of course very high ceilings and fascinating architecture. You will definitely notice the arches in this building before anything else over the windows.

But I found that the Durga puja is being organized just beside this ancient Rajbari, in a thakur dalan. The tiredness of the journey whatsoever gets washed away in a jiffy when you see the sacred face of Maa Durga in all its glory. Locals flock in numbers to visit this place during the Durga Puja, so when I had last visited, the place was pretty crowded which isn’t the case for rest of the year.

The beautiful newly renovated Phulbagh Palace anyway remains pretty empty and lets you spend a lovely time in there. There is a lush green lawn in front of the palace that has an old canon sitting there for ages. You can actually get inside the Phulbagh Palace and check out all the ancient artifacts, medals, paintings, antique collectives and much more. So, by Mahishadal Rajbari we indicate this entire area that consists of two Rajbaris, a court house, a navaratna temple and a ghat.

Very recently restoration and renovation took place at Phulbagh Palace and it was opened to public as a royal museum with all the relics of Mahishadal Raj, you need to pay a nominal fee of INR 10 to get into the palace and witness the history. As already said, I was mighty impressed with the architecture of Phulbagh palace, it’s a mix of colonial, classical and Central Indian architectural styles and the huge white structure looks simply breath-taking! It is surrounded by open sprawling lawns and gardens and simply looks amazing all throughout the day; yes definitely visit this place before sunset!!

The ground floor of this palace houses the museum and it truly lets you slip into a time warp and I bet for the rest of the day you will be in a trance! There are so many rooms in this floor which are packed with antiques and relics of yesteryears. There is a huge living room that houses so many awesome ancient paintings (which are somehow being preserved till date), Belgian glassware, manuscripts, ornate furniture, medals, photographs, books, etc. There is one trophy room where you will find all the stuffed hunted animals, like tigers, deers, bisons, etc. Also there is a room for the artillery jam packed with ancient weapons. There is an old canon with engravings as well.

There is a bedroom which has the dilapidated bed, mirrors, piano, dressing tables, etc. As I am writing this, I am again somewhat going back to that room and getting into that time warp! Even today, around this Phulbagh palace you will find an army of guards protecting the Rajbari and the property.

Phulbagh Palace has of course witnessed loads of Tollywood movies being shot at this spot, this palace is a favorite with Film directors. Especially in the black & white era many movies were shot in this palace and outside it. Mahishadal becomes the focus of attention during Rathyatra every year and besides that, this Durga Puja at the Rajbari is another great attraction! The place is awesome for nature lovers, avid travelers and history buffs. You can reach Mahishadal by road or you may take the trains like Howrah-Haldia local, etc and get down at Satish Samanta halt station in Mahishadal and then take an auto / rickshaw to reach the palace area. I would any day prefer a road trip though! So, do not think twice, plan your next weekend getaway right now!!

And since this is a ‘foodiedada’ post, it has to end with some food tip: this small town still takes immense pride in its mouth-watering mihidana and chhana-r murki, the local sweet makers still give their best to attract foodies with a sweet tooth to this place apart from the history buffs!