The City of Joy often surprises me with its hidden gems, with elements that are present in every nook and corner of the city which can amaze you every now and then. While exploring food and food joints in Kolkata, I have come across places which are decades old yet very less known to people, or no-frills eateries which serve amazing food but have zero ambiance. Exploring these places often gives me much more pleasure than visiting a five-star property and highlighting or glorifying it even more. We are lucky that these days people are more open to diverse ideas, cuisines and food options, hence several small joints, cafes and eateries are opening up to support this demand. A couple of days ago, I discovered one such newly opened café called ‘Roasted Beans’, hidden in a busy alley of Jodhpur Park that can be truly labelled as a hidden gem.

And as you can expect, I am calling it a hidden gem primarily because of its food and beverages, nothing else. According to me, it’s quite a no-frills joint. Don’t expect a super classy, jazzy ambiance out there; if you do, you might be disappointed. But yes, do expect your taste buds to get super pampered during your stay at this place. It really amazed me to find so much potential in such a joint that looked so casual, bit laid back or rather a tad too homely. 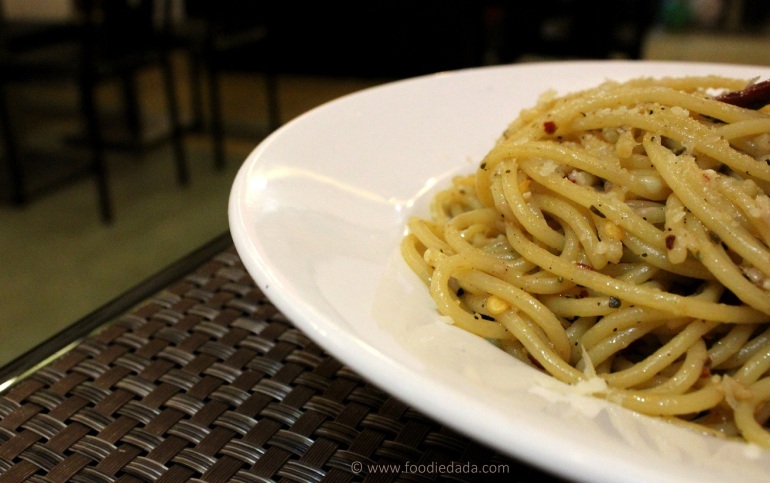 This place, which can still be termed as a ‘newly opened’ joint, is one of the brightest hidden gems that I have unearthed in the recent times. Not that there isn’t any area of improvement, but the age needs to be kept in mind before judging this place with the big daddies of the business; just as a matter of fact, acceleration is more precious than steady speed when it can be handled well. I was mighty pleased with this place since the food did all the talking here and the rest of the glittery paraphernalia (which gets more brownie points from many) took a backseat when the gastronomic deal was in progress!

Its location is surely its boon as it is located right on the main road, quite close to Jadavpur Police Station. But yes, it has got a blink-and-a-miss entrance which you can overlook as you drive by. The entrance is pretty small leading into a narrow alley that will take you to the first floor where this café is located. But yes, there you get enough name boards which should guide you t the café. As already stated, the place has got a homely atmosphere and warm vibe to it.

You will instantly feel settled down and at-home as soon as you step into this place. The entire seating area is divided into a couple of rooms. According to me, the overall décor of the outer area which is closer to the entrance looks better compared to the bigger area inside which can still be improved. But yes, there is enough seating arrangements which is surely a plus point.

Coming to the food, this place primarily serves continental food including some truly amazing Italian dishes which will pleasantly surprise you. Also, you get some great coffee, shakes and mocktails at this place which you can’t miss. But besides the continental fare, they also dish out some Chinese and Thai dishes which I will surely try on my next visit. During this first visit of mine, I primarily focused on their signature Continental dishes which you definitely should have at this café.

So, now let me tell you what are the dishes which I had tried at ‘Roasted Beans’ during my first visit. I started off with a gem of a starter – Crispy Chicken Wings Roasted with BBQ Sauce. The chicken wings were extremely juicy, meaty and drenched completely in the BBQ sauce, this is surely one appetizer which you can’t miss. But yeah, before that we had ordered for Irish Coffee and a Red Bull based mocktail called Red Bull Wedding! The mocktail had a funky presentation with the Red Bull sitting upside down on the glass in which it was served. Maybe a glass jar can be used here instead of the tall glass to serve this drink, otherwise, it tasted quite brilliant considering the fact that I am not a great Red Bull fan. 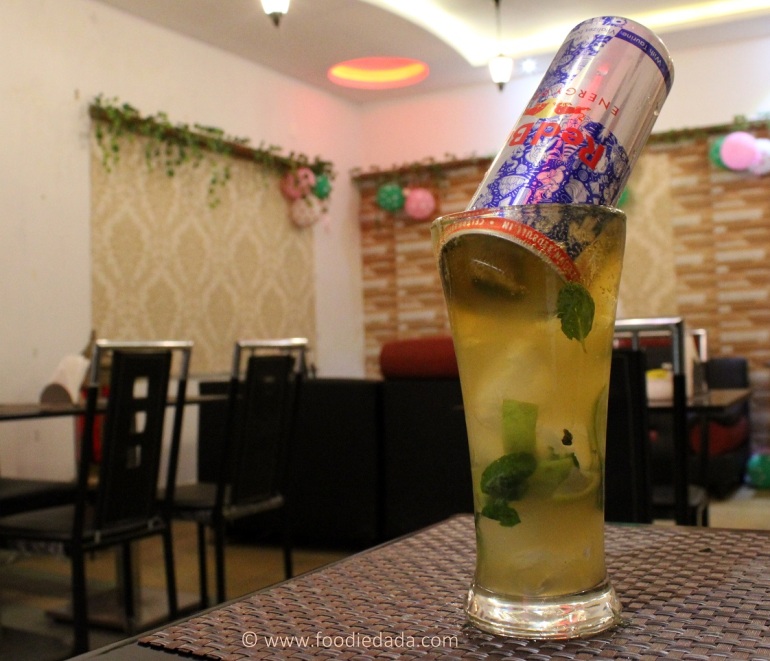 It had a minty touch to it paired with a right dose of sweetness and tang, and of course, the flavor of Red Bull was predominant which was oozing out from its container into the mocktail. The Irish Coffee was nice and pretty strong, pretty good and as expected.

The Meat Lover’s Pizza came in next. It was a large thin crust pizza with loads and loads of meat chunks, bell peppers and pieces of salami on top. It tasted absolutely heavenly and is seriously a divine treat for any meat lover under the sun. The stuff remained pretty soft even after a long time when it was cold. After this, I tried another Italian dish and one of my favorite food items on this planet – Spaghetti Aglio e Olio with chunks of chicken thrown in. Though I love the prawn variant more, but still the chicken one tasted perfectly great at this place. It had the perfect flavor and aroma with that sprinkle of red chili flakes on top.

Now every meal of mine is rather incomplete without a dose of rice! 🙂 So, this last item had some herbed rice, mashed potato, sautéed veggies and a juicy chunk of pork in it. This continental dish is called Roasted Beans Special Pork. But I guess the pork was loaded with fat and the meat-to-fat ratio was not well maintained in this case, people who love the pork fat would have loved it though. But besides that, the mashed potato, sautéed veggies and the rice tasted just amazing and the portion was pretty good for a healthy adult!

The dessert really was like a cherry on the cake. It was a seasonal dessert and I couldn’t have asked for anything better. It was Nolen Gur Cheesecake! The name itself is so appetizing and believe me it can make you go weak at the knees just with those looks. The cheesecake was drenched with fresh jaggery and in fact it was sitting in a pool of liquid gur. The stuff was melting in the mouth and tasted insanely good! It’s a must-try dessert at Roasted Beans, for sure!

In the end, all these were washed down by that chilled mocktail which kinda completed the food tasting session. And now if I talk about the service, then I would say it is effective, warm and courteous, but a bit more attentiveness will do good.  The place promises to serve honest good food and it exceeds my expectations in doing so, the ingredients used are remarkable and the final flavour will surely bring you back. Also, the pricing is reasonable and pocket pleasing. So, food is the real hero at this place without an iota of doubt and I am sure the ambiance will also improve with time. I will be back pretty soon, that’s for sure. Till then I wish the team well and wish them all the best for their future ventures.

Let's never give up or compromise with quality, no matter whatever you do in life! Guess I'm getting all these inspirational quotes from the best in class, Belgian beers! :) All thanks to @polybeercom for bringing in these Belgian beers in Ontario!
Nothing comes close to homemade Mutton biryani! That's a Kolkata style Biryani with the star, potato! And yes, flavours seep deep inside the potato, it's packed with flavours and aroma till the last bite! Kolkata Biryani is all about aroma and subtle flavours, no heavy use of spices or overpowering flavours!
Saturdays often look like this! Especially if it's a long weekend! 🍻
When weekday brekkie looks like this, spicy oriental beef noodles from @mamaglobalofficial paired with boiled egg, honey tossed asparagus, et al.