Chill zones in the city have been redefined repeatedly in the past couple of years or so. And almost every time we are left amazed by the glitz or the very idea behind the establishment. I guess one such joint which I discovered recently is ‘Traffic Gastropub’ that once again pushes the limit of our imagination. Who would have dreamt of a street themed buzzing gastropub in the heart of Newtown (Kolkata) which is otherwise devoid of any good pub or restaurant, at present. I mean if we literally go by the term traffic, then it’s something that we would really like to avoid when we are moving on a fast paced road towards our destination. But I guess here the term ‘Traffic’ is all about indulgence, to get stuck in it to take a pause, take a breather in this fast paced life – Traffic Gastropub is all about that unwinding experience.

This 95-seater gastropub has just opened its doors about a month ago at City Centre Newtown and has become an instant hit with young crowd pouring in even on weekday afternoons! The primary reason for that being the happiest ‘Happy Hours’ which really few can ignore, where you can get drinks starting from just INR 49! 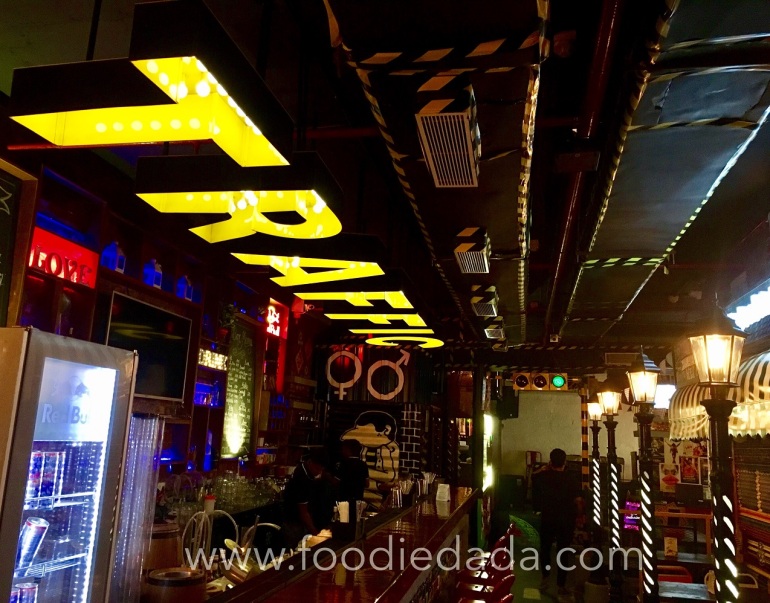 The place has got an amazing ambiance that’s sure to entice you. There is a 25 ft long bar dazzled by a unique name board installation atop reading ‘Traffic’. There is footpath-themed aisle seating arrangement which is flanked by lamp posts like you will find in the streets that really completes that good ol’ roadside feel. Overall it feels damn quirky in there which is accentuated by the rustic interiors and quirky wall arts. There are light bulbs hanging from the ceiling along with colorful chairs, a lovely bicycle mural up above and some cozy corners which will impress you. Not to forget some engaging music, mystic lighting and crazy events which they host every now and then.

Anyway, if I go by the dishes I liked the Chinatown Manchurian balls; it was a nice pub grub. The Parmesan crusted fish was a must-have item which had strips of fish loaded with parmesan cheese and was baked to perfection. The Chili Chicken pizza was also nice, and yes can’t miss that mashi-r mangsho-r chop which are basically meat croquettes. Also the Shish kebab roll was nice which had generous mutton filling in there rolled in the soft paranthas and hung on suspended skewers. 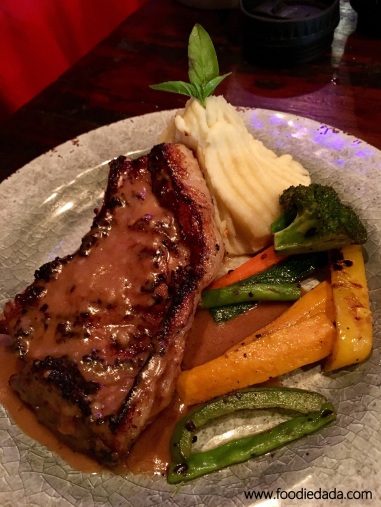 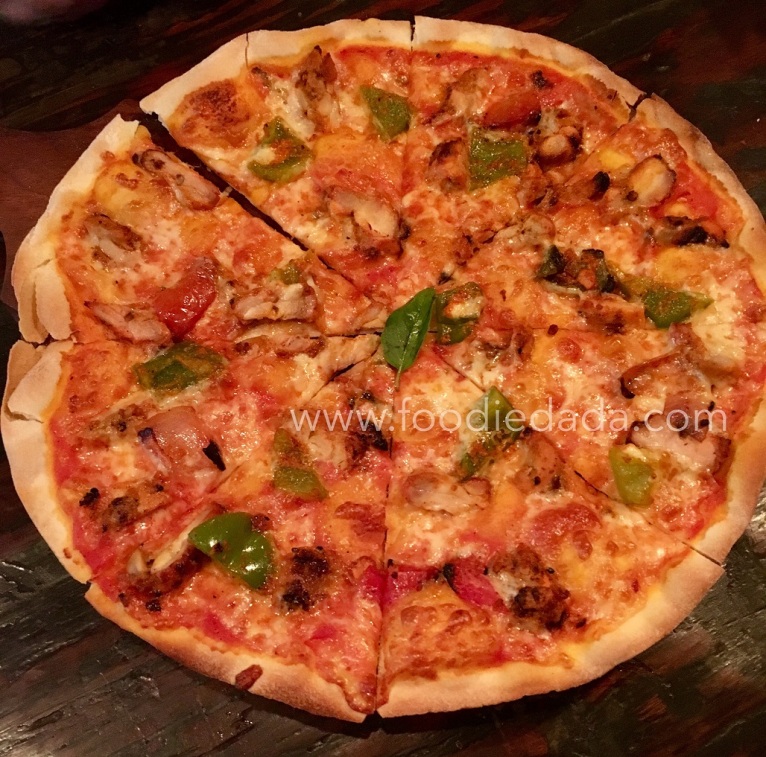 And yes, definitely try the Orange mousse and Oreogasm for dessert. The later is a huge slab of cheesecake with crunchy chocolate base generously loaded with Oreo cookies, chocolate sauce and Cadbury Gems!

In the cocktails, I tried LIIT, Coke-In, Daru ki Tanki, Rastafarian, Tumse na ho payega, Traffic photographic, murbasa, Thai Spa and Mellow Mellow.  The LIIT was of course nice, pretty strong and as expected served in a tall cylindrical glass container. Rastafarian really looked stunning with that smoky touch to it, it tasted amazing as well with that concoction of coconut rum, vodka, tequila, blue curacao, ginger ale, etc. The drink that looked simply amazing was Daru ki Tanki, it’s their signature drink having a mix of Bacardi White rum, Old Monk rum, Banana liqueur, Baileys, pineapple juice and fresh cream! The copper tank in which it’s served is seriously out of the box and truly impressed me.

The service was also pretty prompt, warm and friendly. It’s a must-visit place if you are near Newtown / Rajarhat area and in a mood to unwind. But yes, since they are having this unbelievable Happy Hours offer now, the place is almost always filled to the brim, so maybe you can get some waiting time. But then you can also call your best pals, make a plan and just grab this offer! For me, this place has surely impressed me and I will be back pretty soon. This part of the city badly needed a chilling zone like Traffic. And I am more than happy that it happens to be so close to my residence!! 🙂

P.S. The writer was at Traffic Gastropub on PR invitation for tasting and review purpose.

Beware! It’s Khoka da!! 😳 . When you’re being clicked with Khoka da, you are bound to be scared 😬 All the best for #dwitiyopurush though I’ll be missing the movie here in Toronto. I was super excited about this movie! Not sure if it’ll be screened here anytime soon! . . . #movie #baishesrabon #svf #khoka #instagood #friday #picoftheday #throwback #weekendvibes #blogger #instapic #potd #toronto #instadaily #actor #moviestar #kolkatadiaries #tollywood #bengalimovie #foodiedada
Prepared some yummy chicken hakka noodles at home loaded with veggies and mushroom! Btw these noodles are those typical ones available at Chinese markets and sometimes at Walmart which are pre-cooked and you just need to prepare your veggies and add the noodles directly (I still prefer putting them for a minute in a pan of hot water before tossing with veggies), that’s dinner made easy for you! . . . . #noodles #homecooking #noodlepull #noodle #torontofood #tastetoronto #chowmein #chicken #chinesefood #tiffinbox #lunchbox #stirfried #mississauga #lunchideas #desikhana #desifood #indianfood #noodles #noodleslover #hakkanoodles #kolkata_igers #kolkatablogger #instagood #foodporn #explorecanada #yummy #foodstagram #nomnom #picoftheday #foodiedada
This is poutine! For my non-Canadian friends, this is one authentic Canadian dish you won’t probably get everywhere in your country! This was found rather accidentally in Quebec in 1950s. So I decided to have my first poutine in Quebec though it’s readily available right where I live here in Mississauga. This poutine (in the picture) is a classic one with three basic components — French fries, cheese curds topped with delectable brown gravy! There are numerous other varieties of poutine including smoked meat or pulled pork poutine but this traditional one still remains one of my favourites! . . . . #poutine #poutinefries #cheesecurds #quebeccity #explorecanada #quebecfood #canadafood #foodstory #foodhistory #sundayfunday #sundayvibes #foodstories #tiffinbox #lunchbox #mississauga #lunchideas #desikhana #mobileclick #foodphotography #northamerica #nomnom #kolkata_igers #kolkatablogger #instagood #foodporn #yummy #foodstagram #cheese #picoftheday #foodiedada #foodiedada
Colourful, picturesque Quebec City with its old world charm, buzzing eateries and friendly French speaking population never fails to amuse you!! . . . #quebeccity #quebec #quebecoriginal #travelblogger #travelgram #travel #nofilter #quebec_travelers #instagood #travelholic #vsco #instadaily #doorsofinstagram #french #friday #fridayvibes #wheretonext #quebecregion #explorecanada #kolkatablogger #poser #travelphotography #travelholic #travelxp #pictureday #foodiedada