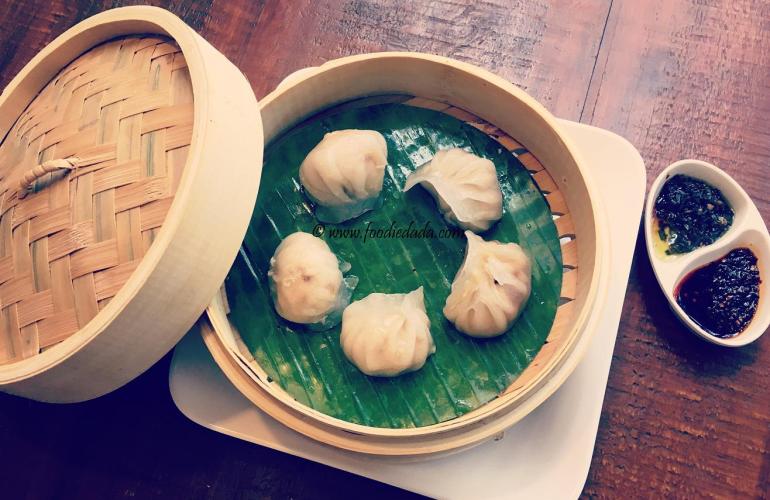 Frankly speaking, few years back I was first introduced to Momo I Am through their unique wall art and graffiti like many other ‘bhaat machh-er jhol’ eating Bengali. That was pretty new in Kolkata then! I was introduced to their food maybe a year later after that artsy discovery! And yes, I was blown away! It’s the time when they had only one outlet in Kolkata at Lake Gardens. And it was genuinely a hidden gem which the city was fortunate to get. Cut to the present day scenario – July 2017 – Momo I Am is now a well established brand and has four outlets in Kolkata! It’s no more hidden but yes, it still serves you the gem of a meal that you won’t get in the city at such reasonable price.

In the meanwhile I had been to some of the South East Asian countries and started developing the taste buds for their kind of authentic food. And then came a confused phase of my life when the aloo posto and biulir dal went for a toss, and my taste buds went on craving for a soothing oriental meal every now and then!! The gastronomical turmoil was getting so out of control, I decided to learn cooking all these at my home. I bought Thai cook books, watched online recipe videos and started preparing dishes like Thai Green Curry, Chicken dumplings, Korean fried chicken and what not, from scratch at my home. And yes, I was mighty pleased because Kolkata didn’t have enough eateries to satiate my taste buds then. Then one day like Ma Durga’s blessings, an outlet of Momo I Am opened near my house at Chinar Park and I got invited for a tasting session! I was simply flying without wings and got the perfect reason to stop cooking!! 🙂 Almost every weekend now I order from this gem of an eatery and devour the food like a hungry shark. 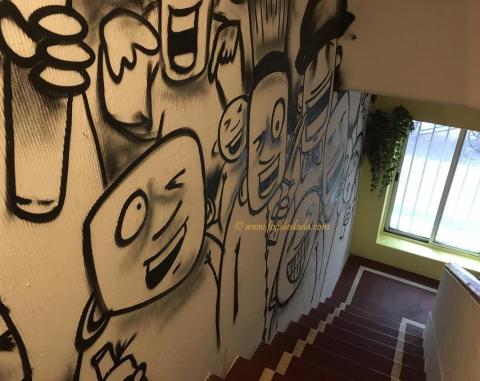 My joys knew no bound when I was informed that they are opening two more outlets in the city – one at Golpark and other at Salt Lake with a bigger seating capacity! That clearly means I get to taste these delicacies now even when I am roaming round the city! Recently I got an invitation from their new Golpark outlet that boasts of having several new items in their menu. And we were in for tasting those new items only, so I was again super excited! 🙂 Before moving forward, big thank you to Reevu and Pravakar for having me over guys! Big shout out for both of them. And yes I absolutely loved this new outlet which is also their labor of love.

This Golpark outlet is located very close to the Mouchak shop (near the crossing) in the lane that has Aminia in there. It is in the building that houses Arambagh Food Mart in the ground floor. The eatery is there on the first floor. The walls along the staircases wear graffiti designs which look so attractive, vibrant and urbane. As you reach the first floor you find a rather narrow entrance to this place. This used to be another restaurant previously, so it had some permanent structures which couldn’t be demolished so easily. The dining area is divided into two sections separated by a waist-high partition.

We were seated in the one which somewhat gives a private dining feel, it is basically in the road-facing verandah section. The huge glass window lets the diffused sunlight to come in that somewhat gives a positive feel-good vibe. It resembles some cute little hilltop eatery with those solid wooden furniture which looks like they have been freshly crafted from some tree logs. Overall the finish is pretty rustic and sets up the mood rightly for some steaming hot hilly food to go with it.

Now without wasting any time, let us check out the items which were offered for this food tasting session by the management. We started off with Iced tea served in rustic mugs, which was okayish I must say and can be worked upon. Then the Asian Cucumber with Feta Cheese was served in a traditional wooden bowl. This was one of the freshest and simplest vegetarian salads I have ever tried. It had diced cucumbers in it hand-tossed in some oil, chilli flakes, a soothing dressing and then bits of feta cheese were sprinkled on it.

Next we got the Indonesian Grilled Pork which was also a salad having fresh lettuce leaves, sliced yellow and red bell peppers, bit dry pork meat portions with finely sliced apple! That tasted absolutely heavenly with that pork meat and apple pieces going in my mouth in that one single bite!

Then we tried the Lhasa Pork which was insanely good, and every time I will order one portion of this for sure. Here the juicy pork meat was sautéed with onion rings and garnished with loads of cilantro on top.

The dimsums came up next and oh boy! I simply loved each one of them, even the vegetarian one was mind blowing. The XO Crystal Chicken dimsums were having generous amount of flavorful chicken and onion filling inside with a thin oily skin topped with a bit of red bell pepper, it tasted amazing with the red chilli hot oil! The Prawn Hargou was also having generous juicy prawn stuffing inside (besides white pepper, ginger, sesame oil) with a translucent skin that almost melted in my mouth; I bet you can’t just have one of these. We tried the veg one in the end, expecting very little from it after trying the non-veg counterparts. But we were blown away after we tried the Truffle Oil Veg Crystal dumpling. It had a translucent thin oily skin which clearly showed the green juicy stuffing inside consisting of minced garlic, cabbage, broccoli, etc. The truffle oil’s aroma is so typical that it will hit you directly and straightaway captivate your senses. The two dips which were served along with the dimsums were prepared with utmost care and passion. The spicy red chilli oil dip consisting of dried red chilli flakes, sesame oil and soya sauce was the better one, perfect for momos. The green coriander dip was prepared with coriander, garlic, onion, etc. 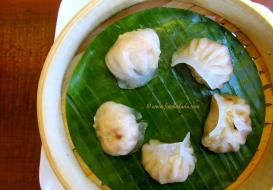 The other items served were mostly impressive. Next we had the Kenzai Fried Chicken, which they lovingly call KFC! It’s served with peanut sauce dip which is thick and creamy. The chicken pieces are served on a bed of spiced up mashed potato and garnished with lettuce leaves! The well beaten flat chicken breasts are marinated with soya sauce, garlic, etc and deep fried with breadcrumbs coating.

Next we tried the Prawn Firecracker. These are deep fried wrapped prawns served with mayo dip. The prawns in there are very tender and well prepared, the outer covering is nice and tad crispy, not too hard.

Next, we tried the dish named Soi56, which looked pretty similar to the previous dish. They look like some cigars, and actually they are batter fried fish stir-fried with tangy homemade Thai spices, scallions and dry red chilies. The fish inside is generally pretty flaky and tad juicy.

After these, only couple more dishes were left to be tasted. Bali Beach Prawn was one of them. The shrimps were stir-fried with bell peppers, garlic, onions and garnished with chopped spring onion leaves on top. The dish had spicy, tangy and tasty gravy, bit different from other subtle flavored dishes.

Last dish before the dessert was served was named – Shangai Wanton with Siracha oil. Now this looked pretty sinful. The silky skinned wantons were placed one after the other in a plate having generous chicken stuffing inside and drenched with red hot oil on the top. There was a garnish of chopped coriander leaves and sesame seeds on top as well. My words are not enough to describe these beauties any further, so better go there and dig in.

The out of the box dessert came up next, it’s called the Raspberry Bao. I have never tasted a sweet dish prepared with Baos, so I was pretty excited to try this. The bao was drenched in some sweet syrup and mildly tossed before serving. It had a filing of sliced bananas inside and served with a dollop of vanilla ice cream. The stuff tasted amazing, more because generous portion of thick raspberry sauce was poured all over making it heavenly and sinful!

So, that concluded our tasting session and by now we were very full 🙂 I will rate this place 9.3 out of 10, which is simply too high according to my evaluation barometer! The service was very prompt all through this while and the owner was extremely courteous and informative about the dishes and its ingredients. The overall experience was worth remembering. Momo I Am is surely a place where I can take my friends and family any day without being a bit skeptical about the food. It’s a place you can bank on even when your wallets are not heavy.

Momo I Am offers excellent Asian food keeping in mind the key factors like authenticity, quality, quantity and pricing. That’s surely a rare breed with so much concentrated focus solely on the food. This Golpark outlet is also no exception and in fact you get to try all these special new items only at their new Golpark and Saltlake outlets now, so that’s another reason to choose this outlet to escape from the turmoil of this mundane life!

That iconic Tdot shot!
It's getting cold outside and I need this hot plate of Cantonese noodles with stir fried crunchy veggies and pork! Super yum and super satisfying!! 😍
Some grilled chicken and chicken biryani for lunch! The biryani was pretty close to Kolkata biryani, aromatic and with subtle flavors, makes you crave for more!
Here's celebrating World Egg Day - my breakfast, whatever it maybe, comprises of one boiled or fried egg! And when you have such delicious homemade chicken avocado salad, then you know that you're in for a great day ahead! 🥚