As they say, ‘wabi’ means simplicity whether it be elegant or rustic, and ‘sabi’ means the beauty of age and wear. This is the place which tries to portray a scene which is not so perfect and complete. It tries to break the classical notion of beauty yet manages to present a soul pleasing environment to dine and shop! It tries to give you a fabulous place to sit and sip your coffee while browsing through some mundane yet beautiful life accessories. The place hosts a beautiful boutique with jewelries, clothes and home décor items which are sure to impress you. The dining place is divided into rooms having a typical ‘Flintstones’ type furniture, which are adorable. The rustic country side artsy wall décor and apt lighting makes the place look beautiful. The exterior and the entrance are quaint and pretty as well with that red tiles making this place quite stand out.

I was there at this place on an invitation from the management, and I was supposed to taste their food and beverages and pass on my comments. Now, this place only served Vegetarian dishes when I was there maybe a month (or so) back. 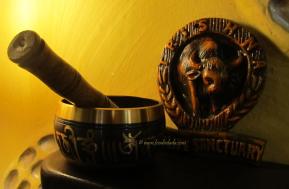 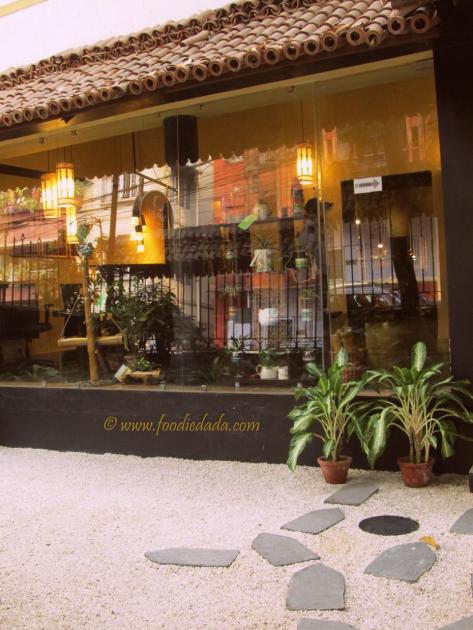 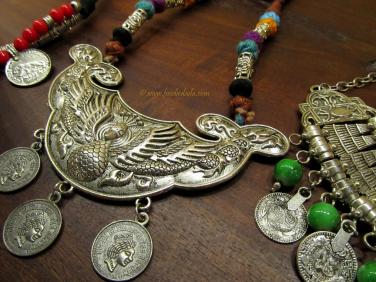 And I felt they really had potential to prepare some great non-veg dishes as well. Anyway, let’s check out the food and beverages tried:

To start with, we tried beverages like – Mango beer, Gandhoraj mojito, Banarasi Pan shake and Spicy guava punch. Out of these, I liked the Gandhoraj mojito and the Banarasi Pan shake. The paan shake was probably best of the lot. The essence and aroma of paan masala was optimum. I expected a lot from the Mango beer but it was pretty run of the mill stuff with no real zing. The food items then came in. The Spanish omelette was prepared with just egg whites and had an underlying layer of mildly fried potatoes, the overall stuff was very subtle to taste and pretty wholesome. 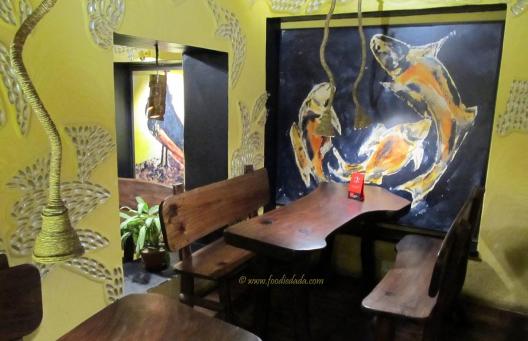 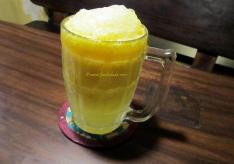 The Gluten-free veg momos came in next in two avatars, both were pretty nice with nice fillings of tomato, spinach, mushroom and other veggies. And they were served with roasted tomato sauce which was nice to go as well though it was not at all spicy which is required to go with momos. The momo skins were bit thick at places which should be avoided. The Sushi platter came in next with our choice of Avacado and Cheese sushis, did not quite enjoy the Avacado sushi though the cheese one was nice. The Double baked potato came up next, it is scooped russel potato loaded with veggies and cheese jalapeno cheddae sauce. The best dish came in the end, it was called Ema Datshi which is Bhutanese chili cheese stew with a lovely thick texture and that came along with cracked wheat pilaf. The dessert which got served is Choco lava cake, but unfortunately it had a hair strand in it which was shown immediately to the servers. 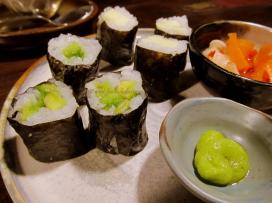 Overall the experience was not brilliant, but not so dull either. It had its share of highs and lows. The service was ice and prompt, and the servers were cordial. I would rate this place 7.2 out of 10 for now and hope the comments will be taken in positive spirit and worked upon. In the meanwhile, if you find time do pay a visit to this quaint and picturesque café and check out the menu which surely has a varied range of items to offer!

When you try to control everything, you enjoy nothing! Sometimes you have to just breathe, relax, let go and live in the present moment!
Sometimes all I love doing is a Noodle pull 😋
Welcome to my sunny day 🇨🇦
Being a Bengali, I take immense pride in buying my own fish and I can proudly say even in Canada I have managed to locate the markets which sell the best fishes and especially the ones I used to savor back in Kolkata, India. Like this Pabda fish, it's a pure bliss to buy this, marinate and cook it yourself.. cooking is so therapeutic, seriously!!