To be very frank, I do not like the concept of multi-cuisine restaurants, it somewhat claims they can serve everything to get more and more customer base, and you aren’t claiming your expertise on any one particular cuisine. Generally I avoid these places, and if you follow my blog posts you will notice I don’t review such places since they are already claiming to know everything about so many cuisines! I don’t dare review such connoisseurs of everything 🙂 But lately, I received one invitation from a similar multi-cuisine joint along with few other Panchphoron food bloggers. As I stepped in, my notion changed a bit since the place was pretty chilled out with not so bright lights, having chic décor, suave lamp shades and comfy couches. I took the seat and tried to make myself comfortable before ordering any food.

The Chicken Lung Fung soup which was served as a welcome dish (since I wanted something nice n warm, like a soup) really impressed me. The quality was something which I didn’t expect from a place which is not an authentic Chinese joint, and yes the generous quantity of chicken in it also didn’t go unnoticed. It was thick with lemon, chili peppers, chicken, and a bit of veggies. So, the first impression was well-built, now we were all settled down to welcome rest of the dishes one by one.

While we were waiting for the North Indian dishes to be served, we clicked some pictures of the ambiance which was nothing out of the world to be remembered. But yes, the black and white domination looked bit out of the box, not something you’ll find in any other restaurant in the city. But that didn’t elevate any parameter for the aesthetic senses according to me. The seating arrangements were not too cramped up, and the couches and chairs were comfortable and again were in either black or in white color. The place was dimly lit and buzzing during the lunch hours, so yes there is no question about the foot fall this place is getting. 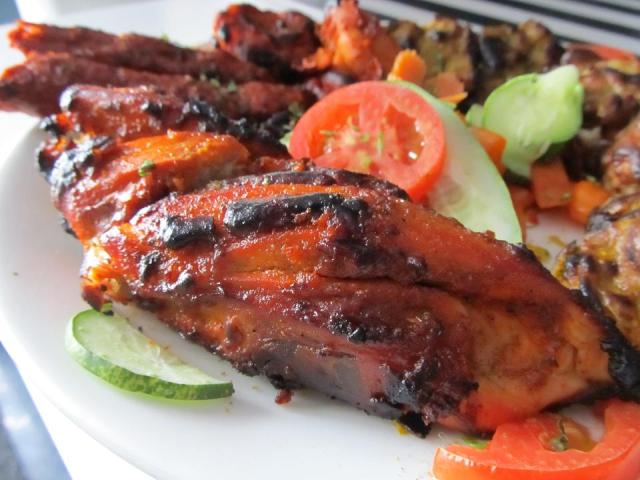 There might be another reason this Rajdanga Kasba area has got immense popularity and that is the Acropolis Mall, which is just beside Cheeni Kum restaurant. It surely attracts more people to this area now, compared to what it used to be 3-4 years back. But yes, one thing that again impressed me was the service, Cheeni Kum can boast of a great team of servers and people who are in-charge of this place, you will get top notch hospitality here which is very important to keep a place running these days.

While taking all these notes, I realized out North Indian delicacies had arrived in the meanwhile. While our fellow bloggers were all busy clicking I checked out the array of dishes which were served, clicked some pictures and then I was keener to taste them since stuffs were getting cold very quickly. So, here are the dishes which were served and savored on this occasion –

a) Achari paneer tikka – Pickled cottage cheese chunks were perfectly grilled, though was bit overdone at places like all other tandoori or tikka dishes. The cottage cheese was fresh, soft and bouncy which was well appreciated.

b) Non-veg tandoori platter – Well this assorted platter had loads of stuffs in it to satiate the meat craving of any individual. It had Lasooni murgh tikka, Achari murgh tikka, Mutton sheekh kebab, Fish tikka and Prawn kebab. I didn’t get to taste the prawn kababs which was really sad. The Murgh tikkas were not good, the chicken was hard all the way, the Fish Tikka on the other hand was really nice with that fluffy, fresh and soft fish in there.

c) Amritsari fish tikka- This tandoori Fish Tikka was really well spiced with Indian flavors of ginger, garlic, cumin and with some chaat masala sprinkled on top. The fish was prepared well with the juicy, soft core intact.

d) Onion Kulcha – Loved all the Indian breads at this place. The onion kulcha was no exception. It was very soft and filled in with minced onions.

e) Masala kulcha –This one is pretty common and here also I didn’t miss out to try this. The masala kulcha was again well stuffed and soft, goes well with some dal makhni kind of a dish.

g) Rara mutton- The gravy had loads of minced mutton as well as the tender cubes of mutton in it, and was cooked together in lovely thick gravy with all the richness and spices stuffed inside it. And yes, this quite satiates your mutton cravings 🙂

h) Murgh tikka lahori- This Chicken gravy dish was good to go with the kulchas, since it had generous amount of barbecued chunks of chicken in it. And the gravy was mild and flavorful.

i) Veg kofta- I particularly don’t like this dish in general, and here also it was not an exception though I had taken a bite into a kofta. The filling was not too soft, it was quite solid and tight which made these vegetable fried balls not so good for me. The gravy though tasted good.

j) Lipta mushroom masala- This was an excellent vegetarian dish which I enjoyed. It had button mushroom along with roasted bell pepper cooked in a thick gravy in their signature tawa style. 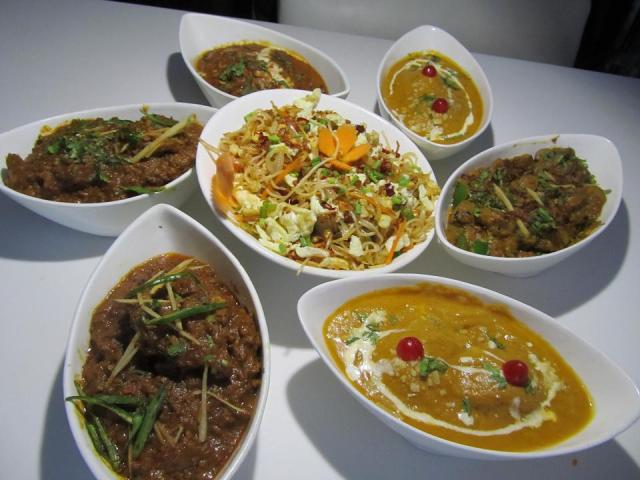 Now coming to their Chinese fare, below are the dishes which were served –

a) Crispy chilli babycorn – Most common dish available at each and every eatery in the town these days. So I prefer to give it a miss, everywhere it tastes just the same and here also it was not an exception. 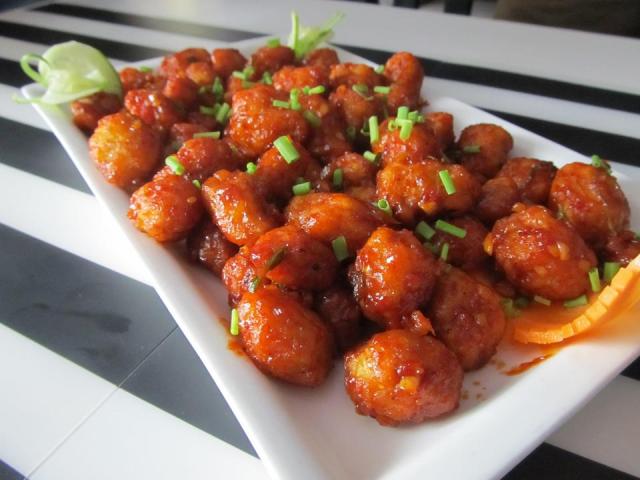 b) Lung Fung Soup – I have already discussed about the Chicken Lung Fund soup above in this review; it was excellent to be honest. One of the ‘must try’ stuffs!

c) Mixed chilli garlic noodles – The hakka noodles were nicely tossed with garlic, red chilli flakes, and veggies in chilli oil. It was overall nice and I somewhat liked the flare of the dry red chilies in it.

d) Veg Manchurian – These were deep fried vegetable balls which I again don’t appreciate much in general. It was served with hot garlic soya sauce, chilli sauce and I would give it a miss if there are other non-veg options available.

e) Chicken sweet and sour – This side was perfect to go with the chili garlic noodles, but the gravy was bit too thick and the chicken pieces were not too bouncy. Some work needs to be done on this to make it more appetizing and flavorful.

Overall, I felt the Indian fare is better at this place and you can go for it. And yes, this place also offers a good home delivery service and has a well stocked bar that can help you sip while you chomp. Though we didn’t try any of these two, but I am sure they can be tried out when required 🙂 On a scale of 1 to 10, I will rate this place 7.5 which also counts in their great service, the promptness and attentiveness of the servers. So, if you are in a group where everyone is not keen to have a particular cuisine then surely you can try out this place, which serves good enough dishes that won’t let you down.
Cheers!

When you try to control everything, you enjoy nothing! Sometimes you have to just breathe, relax, let go and live in the present moment!
Sometimes all I love doing is a Noodle pull 😋
Welcome to my sunny day 🇨🇦
Being a Bengali, I take immense pride in buying my own fish and I can proudly say even in Canada I have managed to locate the markets which sell the best fishes and especially the ones I used to savor back in Kolkata, India. Like this Pabda fish, it's a pure bliss to buy this, marinate and cook it yourself.. cooking is so therapeutic, seriously!!