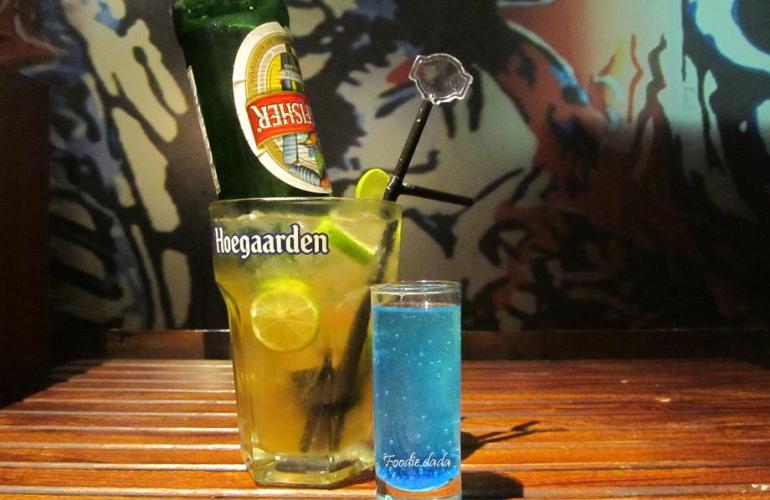 First of all, I was floored by the invitation that I had received through post from Bakstage. It was an invitation to attend the Bloggers Meet at their place over some great food and beverages. The invite contained a vintage Vinyl record which I’ll cherish for the rest of my life and an amazing CD with evergreen numbers like Hotel California, Coming back to life, Summer of ’69, etc. So, after receiving this invite I was certain that the meet is going to be great especially with so many bloggers being invited under a roof. And my prediction was perfectly on target. 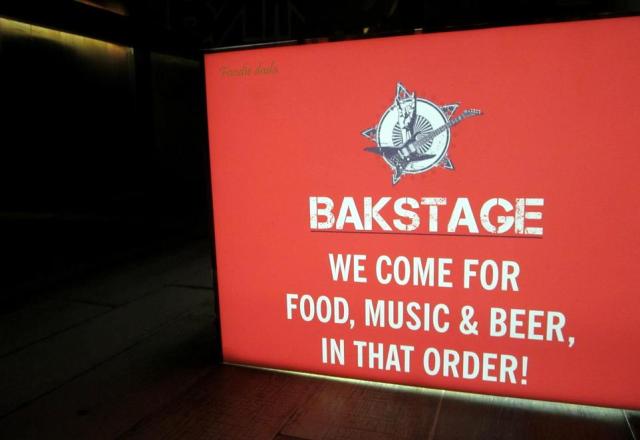 I had been to Bakstage numerous times previously, since it is in the heart of the techie alleys of Kolkata (i.e. Salt lake Sector-5) where I have been spending a major part of my life for professional reasons. This place surely has got the x-factor to bring people back, especially at the pub with the longest bar counter in Kolkata. The ambiance is amazing with some of the best rock numbers being played all the time, things are bit shady with a dimly lit surroundings which somewhat helps you to unwind real fast. You will find lovely posters and framed pictures related to rock music on the walls. Also the walls adorn some musical instruments and accessories like vinyl records (like the one that I had received), guitars, violins, etc. Also you will notice a lush green pool table in front of the projector screen playing some television channel round the clock.
Also you will be amazed if you sometime get to see this long bar counter being lighted up with flames; well, we had planned for it but never really got the chance to stay back and enjoy that sight. Also there is an outdoor smoking area attached with lovely JD themed ashtrays and comfy couches in that balcony overlooking the busy traffic of Electronic complex. 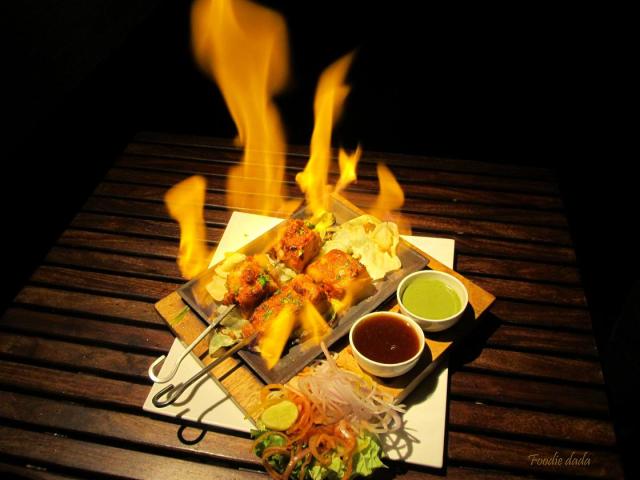 Now let’s come straight to the food that I had tried from the Bloggers Meet special Menu which was set for us. I had ordered for –
STARTER
a) Sharabi kababi – This starter had a nice filling with mix of cheese in it, but most of the the chicken breast piece which was used to prepare these kababs were bit too tough which marred the relishing factor in this lovely dish.

b) Beer battered fish finger – These were nice and crispy, and the fish used inside was tender and fresh. The fish fingers were presented in a conical paper cone, and it came along with typical tartar sauce and finely cut salad. 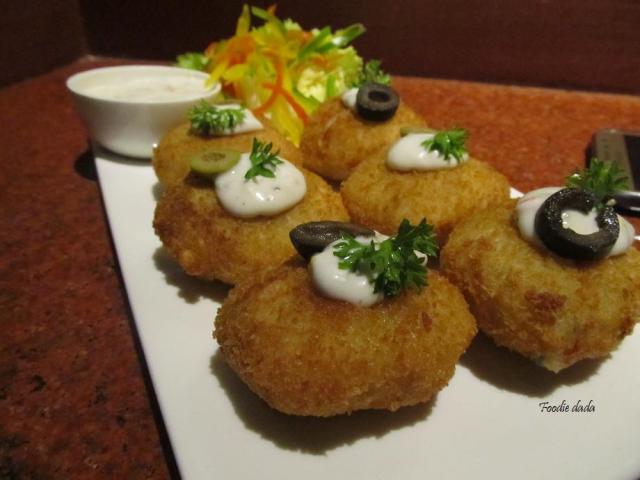 c) C4 – This is quite a fancy named veg starter that has four elements starting with the letter ‘C’. It has got corn, crumb, cheese and coin. These are medium sized fried flatted balls. The filling was overtly cheesy, mushy and enjoyable while the skin had a mild crunch to it.

d) Rocking and smocking fish soola – This was surely the best starter that we had ordered that evening. When it was served it was set ablaze and then when it was served we found the fish inside couldn’t have been more tender, it was amazingly fresh as well! It was flavorful and mildly spicy. I will order it again when I’ll be back at Bakstage. 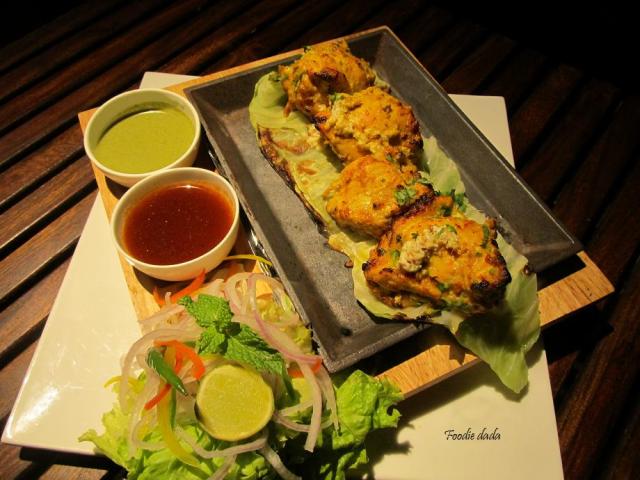 e) Nazza – If I am not wrong, this term ‘nazza’ actually means Naan Pizza, and is one of the signature dishes of Bakstage and quite innovative. It is very desi where Punjab meets Italy 🙂 It has a crispy Naan base with two types of toppings, one is dal makhani and the other half has juicy chicken tikka pieces and cheese toppings. It absolutely tastes great and will leave you quite glued to it with its simplicity and innovation. It actually seemed to be quite close to the thin-crust chicken pizza but had even more to offer! 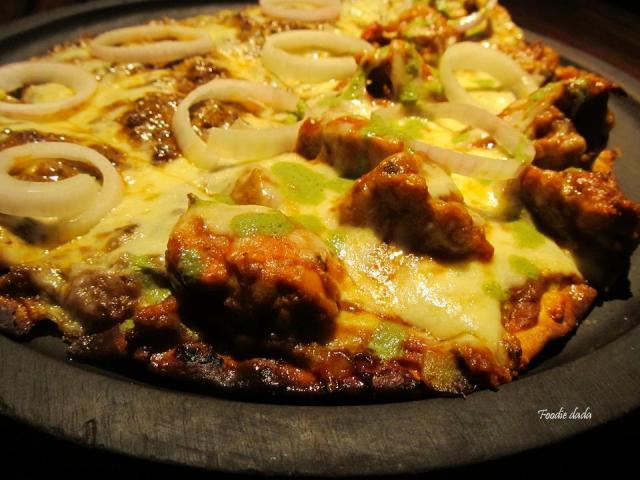 a) Sangria – The sangria was prepared with white wine as per our preference. It was sparkling and tasted bit fruity. Had some fresh and juicy tropical fruits in it to give that ultimate relaxing experience. But it was not served in a typical wine glass which I regretted. 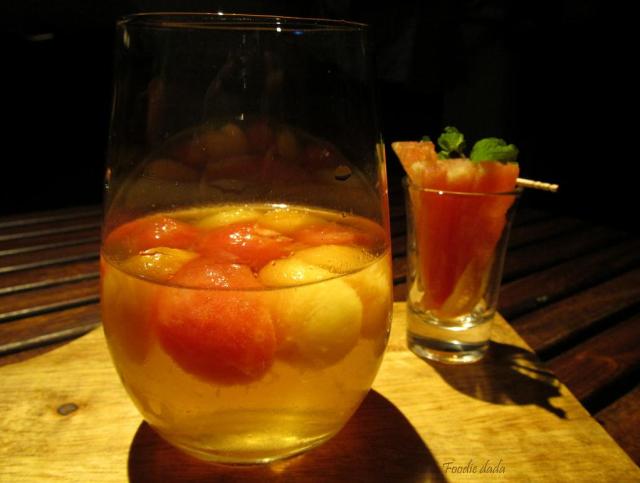 b) Beer margarita – This was the best beverage of the evening according to me. The presentation was awesome as well with an inverted bottle of Kingfisher beer in the glass with so many lemon wedges floating. The proportion of tequila, lime and beer was perfect and very well blended; had a lovely mild tang with impressed me the most. Must try for sure if you are at Bakstage! 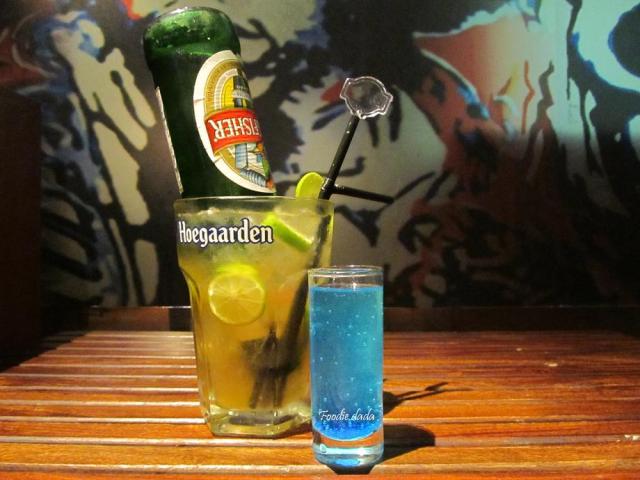 c) Akhir an Nahr – This is sort of a Lebanese cocktail and the term actually means ‘end of the river’. This drink is quite uncommon in Kolkata. But it tasted bit like a mocktail since it was quite sweet and fruity, and didn’t really taste like an alcoholic drink. It is actually a strawberry mojito with a hint of mint in it that is responsible for that rather pleasant and sweet flavor. 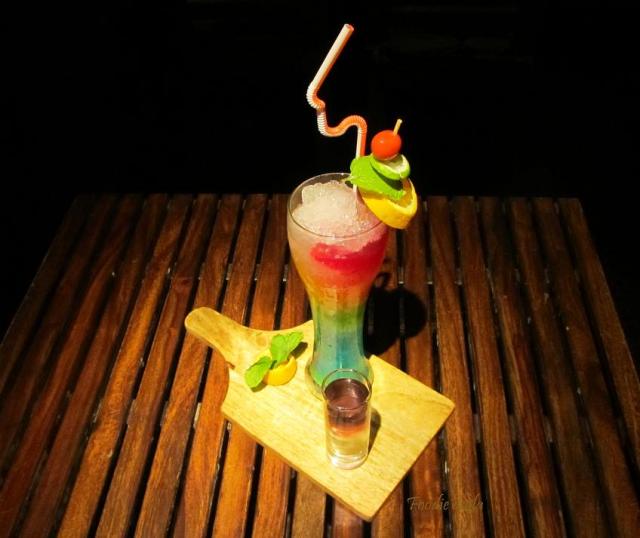 d) Long Island Ice Tea – This LIIT tube was really huge. This is an extremely powerful drink with mix of five white spirits, like vodka, light rum, tequila, gin, and triple sec; then it got a splash of cola to bring that amber hue! The drink was presented in a beaker like long container with measurement markings by its side. Overall it was quite strong, mildly fruity and leaves you pretty high!
MAINS

a) Half roast chicken with Jack Daniel BBQ sauce – I had tried this dish previously at Bakstage, it’s one of their signature dishes. If you are here at Bakstage you should actually try this. And this time also I absolutely loved it. The mildly sweet BBQ sauce does the trick along with the juicy chicken pieces. This dish has roasted chicken full legs along with sautéed veggies, mashed potatoes and finally garnished with some parsley. The chicken piece was literally drenched in the dark JD BBQ sauce that casts the magical spell when you bite into it. 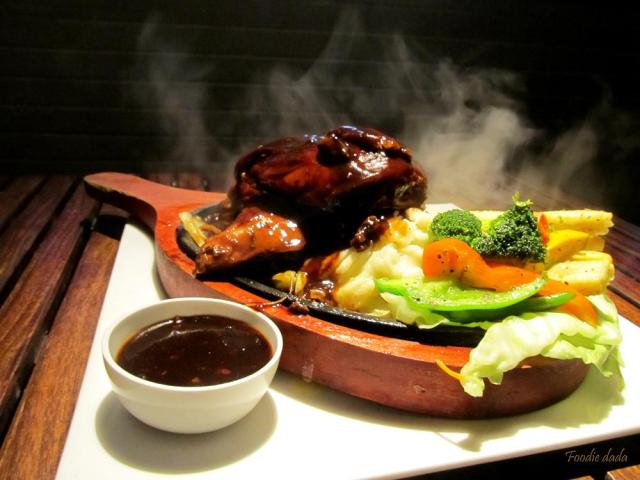 b) Thai green curry with steamed rice – I often tend to order this classic and traditional Thai dish at various places which claim to serve authentic Thai cuisine. Also since I can cook this dish from scratch I know if the proportions of the ingredients are going wrong or otherwise. Here, there was evidently loads of lemongrass, but the basic aroma of sweet basil leave was somewhat missing, the mix of kaafir lime, galangal, coriander roots, lemon grass and sweet basil seemed not to be very perfect. It was not very aromatic and bit less flavorful than what I would have loved it to be. But yes, it was still very soothing which actually pleased me. 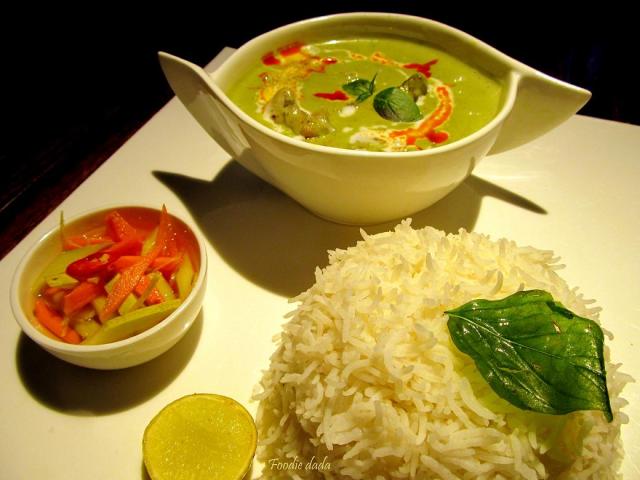 Melting Bak-lava – To start with this dessert looked yum but very difficult to me. It had several layers of complexity which literally unfolded to reveal the inner gem. The presentation was a key part of this dessert. A igloo shaped chocolate dome was placed on the table and then the chef poured a liquid on the chocolate dome and to our amusement the thin spherical chocolate layer melted to reveal the inner core which consisted of the real Baklava dessert cubes. The stuff was nutty, bit sticky, sort of buttery and covered with the molten chocolate on top. Overall it was not overtly sweet and I liked it, though I would have loved a less difficult dessert to finish off the meal 🙂 If you are here with a large group of friends, then surely order this for its lovely presentation and yummy flavored dessert inside. 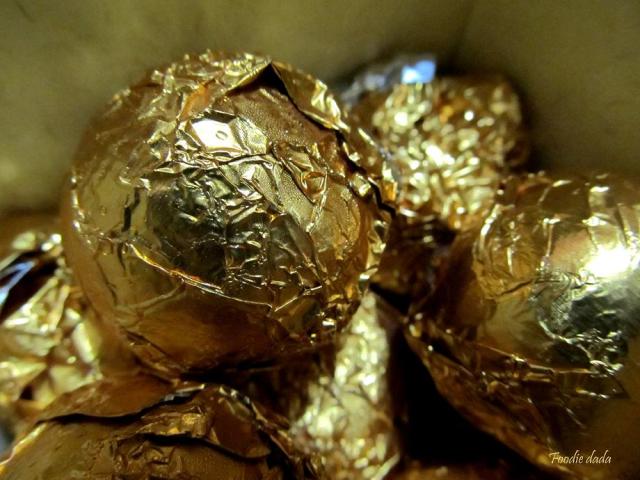 And thus we finished off our meal and we were super satisfied in the end. This place surely does well when it comes to the food and beverages. The service was bit slow when I was here the last time, but this time I didn’t feel so; hope it has improved now. The ambiance is one of the best that you will get in the Saltlake area, so yes this is your place to be if you are looking for some gastro-pub kind of a place, where you will get great food along with your favorite spirits. By the way, when we were leaving we were handed over some hamper which left us overwhelmed which had some awesome gooey spherical chocolate balls, specially crafted for us! Just loved them 🙂 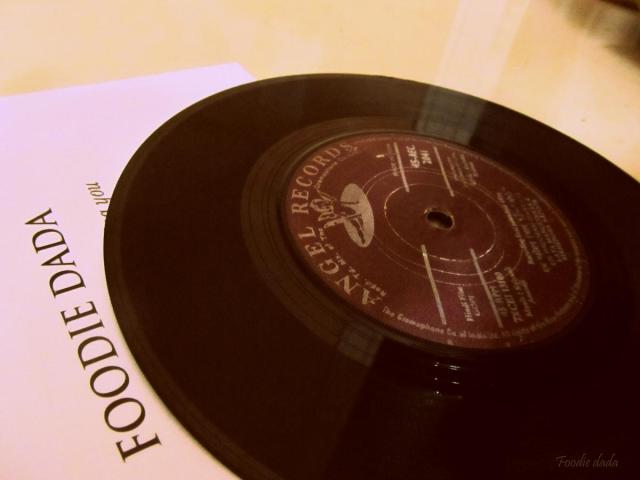 Overall, I will rate this place bit over 8 out of 10, which is really awesome. This place is improving every day it seems, since I have been here several times in the past, I can measure the improvement, which first timers won’t be able to gauge. So people, hit the pub for your weekly unwind sessions and order for the stuffs I have mentioned here which I have recommended, you will surely love them all!
Cheers!